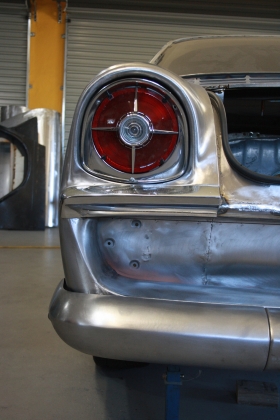 Being built by Adam and Kylie Perry with the close support of custom guru, Howard Astill from Astill Design, Tailspin is an FB Holden with an amazing difference.

The extraordinary concept essentially involves switching the front bodywork to the rear, with tail-lights fitted in place of headlights, and vice-versa. The complex project is currently in the metal fabrication stage with the plan being to have it painted by early 2015 and completed for the spectacular unveiling in mid 2015. The high quality range of Startline Topaz Abrasives is already being used for the metal preparation phase. Later on, Startline Masking Tape will be also be used, along with a Startline by SATA Spray Gun. To keep track of this mind-blowing project, go to www.facebook.com/groups/Tail.Spin.Project/.